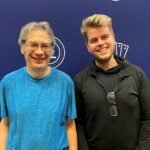 Boosted by a strong carryover and strong first final session, Michael Rosenberg and Zach Grossack won the six-session Kay Platinum Pairs by a margin of two boards. This was the first NABC pairs victory for their partnership, although the duo has played together on several teams in national contests.

Rosenberg, of Sunnyvale CA, and Grossack, of Newton MA, qualified second after Saturday’s semifinal round. In the first final session, they scored 61.26% to move into the lead. Their last session score of 53.85% was good enough to clinch the win with a total of 435.82 matchpoints. 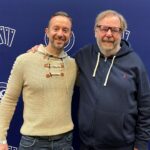 Second in the Platinum Pairs: Eric Greco and Jeff Meckstroth

In second with 411.55 matchpoints (top = 12) was Jeff Meckstroth and Eric Greco. They led the event after the semifinal round.

After the victory, the winners jokingly noted that they had suffered a disaster on each of the first boards of the first five sessions of the contest.

“But bad starts are good,” said Rosenberg, “because they give you an energy that can propel a come-from-behind win.”