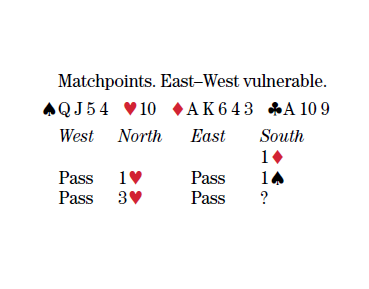 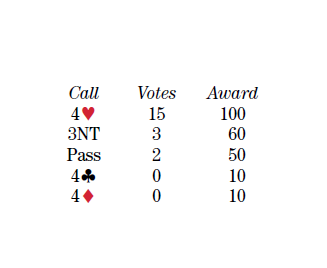 Talkative 10s
Even with just a singleton in partner’s suit, all but one panelist (and Bridge Buff) accept partner’s invitation to game.

Cohen bids 4♥ “based on my ♥10.” Further, he chooses hearts “because most hands I mentally construct show that it will play better in hearts (than in notrump).”

Falk calls this hand an example of why he hates fourth-suit forcing. “Partner may feel it necessary to bid 3♥ on poorish hearts sometimes since the only option is to force to game rather than invite game. Despite the club spots, I don’t feel I should ‘grab’ 3NT. My second choice is pass and go plus (it is matchpoints). But the two 10s sway me to try for game.”

“With my aces and king, I prefer being in a suit contract,” says Kennedy. “I have too much hand to pass.”

“Partner is interested in a heart game,” says Walker, “not 3NT. Unless I hold a big hand, 3NT is rarely a good contract after this auction.”

“3NT is tempting,” counters Weinstein, “but my minor-suit controls suggest 4♥ is better. The ♥10 is nice, but partner’s hearts may not be good enough for 3NT if the opponents succeed in cutting communications.”

Sanborn raises to 4♥. “I believe that these hands play better in partner’s suit since I don’t have a real source of tricks in my own hand.”

The Gordons also raise 3♥ to 4♥. “Pass could be right, but 3NT is masterminding.”

Hampson, too, suggests playing in 3NT. “I have a pretty good hand and prime cards plus the spot help in clubs, but I have no real heart fit. So I will try for nine tricks and the game bonus. If partner continues to 4♥, then ♦A K, ♣A should be of help.”

“Pass is easy at matchpoints,” according to the Coopers, “although with a second heart, we would bid game. At IMPs, we would bid game if vulnerable. Three quick tricks and two possible sources of tricks are very good.”