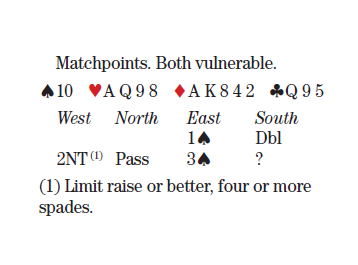 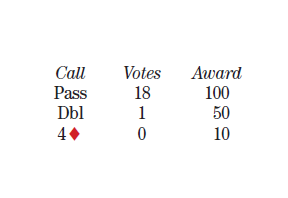 Seeing red
Acutely aware of the vulnerability, the panel is nearly unanimous in choosing to pass.

The green cards have been restored to Rigal’s bidding box, and he puts one on the table. “The vulnerability is wrong for action — and who knows what LHO will be doing? Partner had an opportunity to act and a safe position to get a call in. And he didn’t.”

Sanborn echoes, “No reason to think partner forgot to act at the three level.”

“Bidding begs to go minus 200 versus a partial, or lots more versus a game,” says Boehm. “Partner is close to broke.”

Meckstroth calls the hand “close, but not quite enough to take another bid.”

“We have what we promised plus a queen,” the Gordons point out, “not enough to keep fighting.”

The Joyces pass: “Although we hate to give up, we can hardly force to the four level with such shaky hearts and clubs.”

Falk says, “Close, but double risks minus 200 or 500 against a possible partscore. I have a tad extra, but not so much I can force partner to bid at the four level vulnerable. If the auction continues pass–pass to partner, he will know I have whatever values are not in his hand given that the opponents have stopped in a partscore.

He is not compelled to pass. He could have a hand that was not good enough for an immediate bid over 2NT, but is a suitable bid over 3♠ — e.g.,

The Sutherlins add, “East’s failure to bid 4♠ seems to mark partner with some values. But he probably doesn’t have enough to make game our best chance to go plus.”

Kennedy lets her double speak for itself.