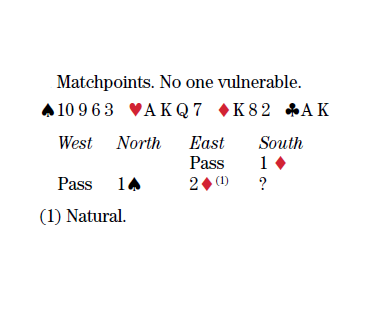 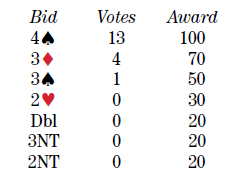 Damn the opps, full speed ahead!
A few see the intervening diamond bid as a boost, a few consider it may be a harbinger of “ruff” seas ahead, but most ignore it and bid what they would have bid had there been no 2♦ bid at all.

And the Coopers. “4♠. What we would have bid if East had passed.”

Walker, too: “4♠ — the same bid I would have made if East had passed. The overcall didn’t make my hand significantly better or worse.”

“Must bid what we would normally bid if there had not been an overcall,” reasons Stack, “although I’m tempted to pull in the horns and bid only 3♠ because of the diamond bid.”

“I have the values for a 4♠ bid and would have bid 4♠ without the interference,” says Meyers, “so why should I hesitate now? Plus the ♦K is well placed.”

“I might have bid only 3♠ had right-hand opponent passed,” says Sanborn. “But now the ♦K looks more like an ace.”

“I am on the upper end of my 4♠ bid,” Weinstein says, “but it’s a much simpler bid than 3♦. Add that to my bad trumps, and I am willing to go low. The ♦A would be such a powerful card on this hand, and without it, I don’t feel I am good enough to torture partner with 3♦. If partner passes 4♠ and we miss a decent slam, East’s bidding might be a warning that things are breaking very poorly.”

Meckstroth bids 4♠, too. “Perhaps I should be more cautious, but this is the bid to accurately describe my strength.”

“4♠ ought to suggest 18–19 and probably very close to this precise pattern,” explains Rigal. “I’m not especially worried about diamond ruffs here. (After all, I’m dummy. Let partner worry about them.)”

Lawrence shares Rigal’s partner’s problem, but bids 4♠ nonetheless. “My big concern is that West will ruff a diamond. However, 3♠, with solid holdings all around, is still too conservative for me.”

Boehm, Colchamiro, the Gordons and the Sutherlins cuebid 3♦.

“We need to let partner know that our raise to 4♠ includes the ♦A or ♦K,” insist the Sutherlins. “He can now move towards slam with ♠A K Q and a worthless doubleton in diamonds. With less, we would settle for 4♠.”

Colchamiro says, “I know 3NT is a possibility, and if partner bids that over my 3♦, I’ll strongly consider passing to avoid ruffs.”

The ability to cuebid allows the Gordons to shop a little. “Sure, we were going to bid 4♠ in an uncontested auction. But the 2♦ bid makes us interested in possibly playing notrump if partner has ♦Q x (x).”

Falk caps the hand’s value at 3♠. “Why would I do anything different? This is what the hand is worth. While the ♦K seems like it has grown in value, the chances that East has seven diamonds subtracts an equal amount, so with bad trumps, I’m certainly not worth 4♠.”