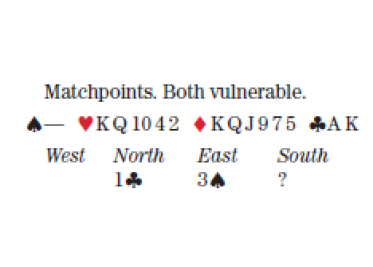 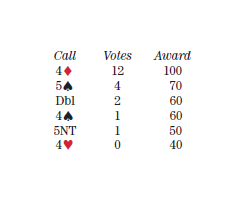 Whither are we wandering?
“One of Edgar Kaplan’s rules was ‘When in doubt, I bid my longest suit,’” quotes Colchamiro. “4♦. Nuff said.”

“We cannot imagine what else to do,” comment the Gordons.

Meckstroth, who also bids 4♦, looks ahead: “My next bid will probably be 5♥.”

“I’m not stopping short of slam, so whatever happens after 4♦ (other than partner taking control), I’m going to bid hearts, then 5NT ‘pick a slam’ to suggest this kind of hand to partner,” plans Falk. “It’s far too dangerous to make a negative double. Partner would pass with uncountable hands where we are cold for a grand slam, and may do so with others, having nowhere to go from his perspective over a negative double. I don’t like putting partner under unnecessary pressure when I have a straightforward bid to make.”

Walker is setting the bar even higher. “4♦ followed by 6♥ to force partner to choose at the seven level. It’s barely possible that he doesn’t have both red aces, but that’s a chance I’m willing to take.”

Meyers likes 4♦ because it leaves the door open for partner to bid 4♥. “This is another hand I am going to force to slam.”

“I don’t care for 4♠ (suggesting club support) without some idea of where we are headed,” says Boehm.

“Negative double might work or be disastrously wrong,” says Rigal. “Not sure of where I’m going, but getting one of my suits in and keeping the auction going can’t be all bad.”

The Sutherlins follow suit and bid 4♦. “Plan to bid 5♥ (forcing) next and probably end up in 6♦ or 6♥. Starting with a double is absolutely out. How sick would we be if partner passed?”

Kennedy does start with a negative double — and a fervent prayer. “I hope partner doesn’t pass.”

Giragosian makes a direct cuebid. “I will correct clubs to diamonds to show a big hand with diamonds and hearts.”

Cohen bids 5NT to suggest two places to play slam. “I’m just going to guess to put this in six of a red suit (correcting 6♣ to 6♦). There are many ways to go here, none of which will scientifically get us to the right contract.”

It is unfortunate that Bridge Bulletin Standard doesn’t play Exclusion Key Card Blackwood, or (1) the scoring would have looked more kindly upon 5♠ and (2) this hand might have been a little easier to bid.

“5♠ Exclusion Key Card for clubs seems fairly clear,” Stack asserts. “If we have two, we will bid 7♦. Otherwise, we will alight in 6♦.”

Weinstein is “willing to gamble on slam and this is the most straightforward way to find the grand. I’ll convert 6♣ to 6♦, which I hope is as obvious to partner as it is in my head. I am confident when I raise 6♦ to seven that at least that part will be clear.”

“I expect partner to respond aces excluding spades (no trump suit implied),” says Sanborn. “I will bid 6♦ or 7♦ depending on the answer, and I will be sad if partner is void in diamonds with ♥A–J–x–x. I keep remembering that preempts work. They create new bidding situations, so use them.”