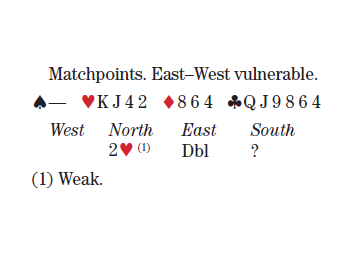 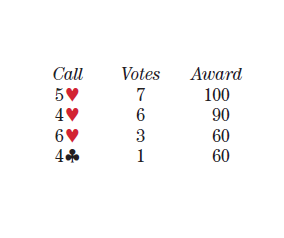 The tables are turned. Now we get to jump. The question is how high? (Or, in the case of the stray non-heart bidders, what and why?)

“5♥,” says Stack. “We will bid immediately to the level that hopefully will give the opponents a problem in evaluation.”

“We’re all guessing, and this takes away Blackwood,” say the Joyces.

“With no spades, I can’t imagine that the normal LOTT will do the job — surely one opponent will bid 4♠” points out LOTT-meister Cohen. “Since I will want to save over that, I might as well do it now and make it tougher on them.”

Sanborn says that in her own partnerships, “a bid of 4NT says ‘I have no defense.’ But 5♥ will most likely draw 5♠ on my left, which may appear to East as a bid under pressure. He may give his partner some slack and pass with a good hand.”

Walker bids 4♥ to use up some space without pushing the opponents too hard. “5♥ feels like the ‘right’ preempting level, but a 5♠ bid over 5♥ will sound a lot stronger to RHO than a 4♠ bid over my 4♥.”

Several experts decide to take the guessing to the six level.

Weinstein believes 6♥ has a shot to make West double “since the opponents probably will not be playing a forcing pass. I think it has a better chance of working than 4♥ or 5♥, and I don’t see bidding clubs or psyching spades helping me.”

Then there are the three solo artists:

Falk passes. “Any number of hearts I bid will just give away the show. Suppose LHO has something like:

Over 2♠, “RHO will raise to game. Over 3♠, perhaps he’ll make a slam try, but LHO has nothing extra and nothing to cuebid. On the other hand, if I bid 4♥, 5♥ or 6♥, LHO can ‘see’ his partner’s heart void and will recognize that slam probably has a play, meaning that I can’t shut him out. I could bid some number of clubs, but when LHO has a stiff club (West surely has a bunch of spades), that will just make his hand look rosier to him. Finally I could psych some number
of spades, but that hasn’t worked for 40 years when they have at least 10 spades between them. They’ll double, I’ll have to run and then the cat will be out of the bag.”

4&cubs; could be effective if it’s fit-showing and suggests a heart sacrifice. It’s what Rigal bids. “This is the sort of deal that requires you to be an expert at the game of chicken. My guess is that they can make 5♠ but not 6♠, but I would rather they doubled us at a lower level than a higher level. Making a fit jump may put West (with his ♣x x) off bidding too much. But frankly, it’s a crap shoot and you just have to guess well here.”

The Coopers go through with the 4NT ruse. “Let’s find out how many aces partner has so we know how high to save, and in the meantime, throw some dust in the opponents’ eyes perhaps.”