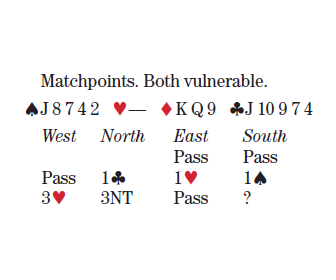 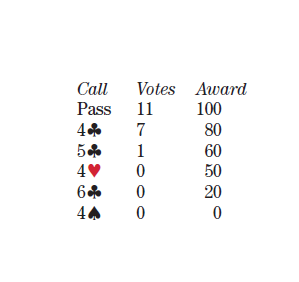 There must be hundreds of 3NT contracts a year — some good, some bad — attributed to Hamman’s Law, which suggests: “If you have a choice of reasonable bids and one of them is 3NT, then bid it.”

Does passing 3NT with this hand constitute an application of Hamman’s Law? Whatever the reasoning, it is the contract most of the panelists settle for.

“Hamman’s rule,” cry the Joyces. “Maybe what we have will be just what partner needs.”

“I don’t have any real reason to disturb the top matchpoint spot,” says Meckstroth.

“No reason for us to go looking for a club contract,” affirms Rigal. “Matchpoints makes us do silly things and some of us are especially well-equipped to do that at any form of scoring.”

“Partner would have to have a void in spades to make 6♣,” adds Kennedy, “but how can we know that?”

Walker, too, trusts partner to know what he’s doing. “Partner knows the opponents have at least nine hearts, and if he had doubts about his stopper, he could have doubled to show extra values. I expect him to have either a double stopper or a single
stopper and plenty of tricks.”

“Partner is ready for a heart lead,” agree the Sutherlins. “We do not have enough of a hand to try for 6♣ with our combined heart wastage.”

“Partner should be happy with this dummy,” say the Gordons. “There’s too much likely heart wastage to investigate slam.”

Seven panelists bid 4♣ and, like Lawrence, describe it as “natural and forcing. Partner showed a pretty good hand so my trying to stop in just 4♣ does not make sense. The rest of the bidding will be challenging.”

“If partner has no interest in clubs, he can rebid 4NT (to play) over 4♣ with hearts well stopped,” says Boehm.

“Even if partner has two heart stoppers, I don’t see a source of tricks,” says Robinson. “Hopefully he’s short in spades so he can score many trump tricks.”

Weinstein says he’d feel better about bidding 4♣ at IMPs, “but even at matchpoints, I can’t bring myself to pass when 3NT could easily be down and 6♣ is a great contract. I hope partner with two heart cards bids 4NT.”

Sanborn agrees. “4♣. No second choice. We could easily have a slam. How can I not raise?”

Inquiring minds want to know: What would Hamman do with this hand?
“4♥ even though partner will initially think I have a 4♠-plus bid,” he says. “Assuming he takes aggressive action for spades, I will correct to 6♣. Over 4♠, I will settle for 5♣. Over 4♣, I will gamble 6♣.”

He says the genesis of Hamman’s Law came as a reaction against the golden rule that a 4–4 major-suit fit must be played in four of the major rather than 3NT. But it certainly doesn’t apply to every 3NT bid. “That’s silliness,” he says.