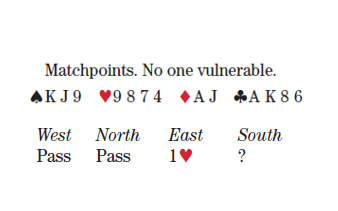 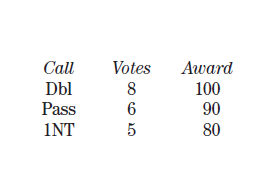 This problem generated a close vote for three reasonable strategies.

Leading the pack are the doublers, who opt to overlook the hand’s several flaws: the doubleton diamond, three-card spade holding and four cards in opener’s suit.

“Double is a terrible bid,” says Falk, even as he puts the red card on the table, “but pass won’t solve my problem and a later double will suggest heart length and strength. It’s better to show some values now and hope that if partner offers diamonds, he’ll have at least five of them. I’d rather offer a general invitation to partner to compete now, as later I may really find myself shut out.”

Colchamiro doubles. “1NT is not my style and pass with four low hearts seems weird. But then again, so is doubling with four cards in their suit.”

“Double,” says Sanborn, as well. “I don’t like bidding 1NT, especially after a major, with just a whisper of a stopper. There’s nothing wrong with a double, because I have sufficient HCPs to make up for only three-card spade support.”

Kennedy is in the doubling camp, but calls 1NT “a close second.”

Lawrence doubles, “but only because it’s matchpoints.”

Meckstroth doubles, too: “I need to get into the bidding with this much strength.”

The Gordons pass. “We cannot imagine an alternative with this hand.”

Cohen is fiercely, vehemently, savagely opposed to doubling or bidding 1NT. “You can’t get me to double when I am not prepared for partner’s response in my doubleton.” (He then shamelessly refers readers to his May 2012 Bridge Bulletin article on takeout doubles.) “Neither will I overcall 1NT with 9–8–7–4 as my ‘stopper.’ Passing doesn’t deny a good hand.”

Boehm is of the same school. “I’m not trapping, but I’m stuck for a sensible bid. Reflecting the Roth-Stone influence of my youth, I’m willing to back my judgment later in the auction.”

The 1NT bidders were especially motivated by the fact that the 1♥ opening came after two passes.

Robinson explains: “If this was a first- or second-seat 1♥, I would pass. But because it’s a third-eat 1♥, it could be a four-card suit. If I double, I have no answer if partner bids 2♦.”

Rigal, too, bids 1NT: “Failing to bid over a third-in-hand opening bid will doom you to a silly result — although I admit I’m not guaranteed a sensible result by acting!”

The Coopers point out that “partner needs very little to convert my heart holding to a stopper. We will be embarrassed only if he bids 3NT and they cash five hearts!”