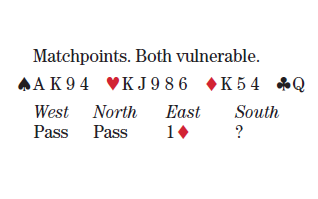 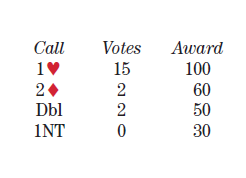 The panel emphatically believes that a simple overcall of 1♥ is the right bid on this hand. They expect an opportunity to double or show the four-card spade suit when the auction comes back around.

“It might be nice to double first to get the spades in play, but my hand isn’t good enough to bid hearts freely at a high level,” explains Meckstroth.

Rigal elaborates: “With both majors, there are hands where one needs to double — especially when your hand is worth only one call. But here, where you have enough values to bid again (and a singleton in an unbid suit), it looks clear to bid and then double or introduce the second suit. Had the opening bid been 1♣, this would have been a tougher decision.”

The Sutherlins don’t care which minor is opened. “We would bid 1♥ even if opener had bid 1♣.”

Stack briefly considers 1NT, then bids 1♥. “Overcalling 1NT is okay on values, but a total misdescription of the distribution.”

Boehm, too, pauses before overcalling 1♥. “I can tolerate Michaels on a 5–4 and a minimum but not on a midrange hand. There are too many rebid problems.”

Falk agrees. “This hand is just not good enough to double and then show a suit, nor is it suitable for a Michaels cuebid (although that is closer than double). At these colors, partner will not have a sense of humor when he expects 5–5 for a 2♦ bid.”

Walker bids 1♥: “The doublers must have their partners trained to bid a major. Mine always bid clubs.”

So, then, what about the doublers? There are two of them, and they know they’re stretching it.

Robinson says it depends on what 2♥ means if partner responds 2♣ to the takeout double. “This hand is almost good enough to bid 2♥ anyway, so I double and correct to 2♥. I don’t want to lose the 4–4 spade fit.”

Sanborn’s more optimistic approach comes down to one card. “Position of the ♦K makes this hand barely worth a double then a bid of a new suit. The reasons are valid for the double if I can upgrade my hand.”

Two of the panelists make a Michaels cuebid with the hand.

Kennedy thinks partner will have a much clearer picture of her hand if she shows both majors at once. “If partner has 2–2 or 3–3 in the majors, he’ll bid up the line. I have enough high-card points to compensate for having only four spades.”

Lawrence explains his reasoning: “With five spades and four hearts, you can overcall 1♠. With four spades and five hearts, things are more awkward,” he says. “2♦, Michaels, shows your approximate pattern, you have a good enough hand to back it up and you bother their bidding much more than if you overcall or double.”