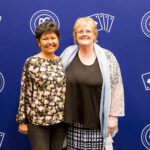 The winners, Canadians who have relocated to other parts of the world, had three exceptionally strong sessions. On Tuesday they scored 63.72% and 61.28% to lead the qualifying round handily with almost four boards of carryover. A 49.46% in the first final dropped them to third place, but 61.38% in the last session put them on top by half a board. Their final score was 815.42.

While they have several Canadian championships, this is their first NABC title.

“For 50 years, this has been the best women’s event at a national,” Nisbet added. “Everyone was so nice.”

Karen Lee Barrett of Elk Point SD and Kathryn Kimmerling of Blythewood SC were second with 802.47.