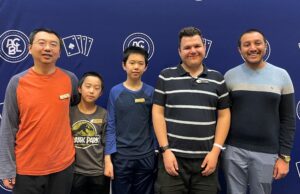 The team captained by Kyle Rockoff won the 0–10,000 Knockout Teams. Rockoff, of Gilbert AZ, played with Sarik Goyal of Worcester MA and teammates Victor Xiao and his two sons, Eric Xiao and Jeff Xiao, who are 13 and 10 years old, respectively. They are all from Shrewsbury MA.

We believe Jeff is the youngest person to win a limited NABC event, edging out Andrew Jeng, who won the Young 0–1500 Pairs in 2011 at the age of 14.

“I thought we had some bad boards, I was so nervous,” said Victor, “We finished so early.” The

The Xiaos, who play Scanian five-card majors, a Swedish system, finished about an hour before Rockoff and Goyal. “We were all playing slow, we didn’t want to have a bad set,” said Rockoff. 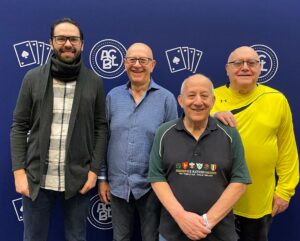 In second place was the team captained by Michael Ranis, of Aventura FL, who was playing with Carlos Hoyos of Bogota Colombia; Michael Wolf of Fort Lauderdale FL, and Lee Bukstel of Boca Raton FL.

Rockoff’s team never trailed, although the margin going into the last quarter was only 22. They picked up one more IMP in a close last set (18–17) to win the event by 23.