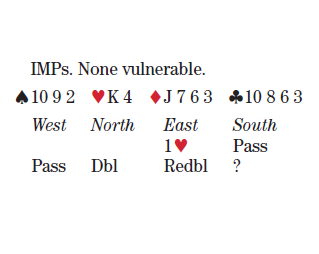 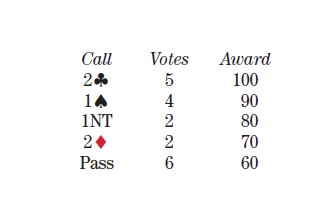 This bidding challenge would appear to be the inverse or the converse of a problem featured in a previous It’s Your Call set. Does passing constitute a conversion of the redouble to business? Fourteen panelists thought so then; 13 panelists, by bidding rather than passing, think so now.

The Coopers, the Gordons, Rigal, Stack and Walker elect to bid 2♣, their cheapest four-card suit.

“Pass is penalty so we have to bid,” declare the Coopers.

“Pass is for penalty when sitting directly over the redoubler,” explains Walker.

“Because pass would be penalty, I must bid. I’ll bid my suits up the line rather than bidding 1♠ and trying to stay low, albeit in an inferior spot,” says Rigal.

Boehm, Lawrence, Sanborn and the Sutherlins prefer to start low, and all are prepared to run if doubled.

Sanborn emphasizes, “The one important point of this hand is that passing is for penalties! It is not an I-have-nothing-to-say situation.” Lawrence explains further: “It is standard now to play that a pass here shows you want to defend against 1♥ redoubled. Given you have to bid, finding that bid is the interesting part of the hand. I suggest 1♠. If doubled, redouble to show the minors. Guessing to bid 2♣ or 2♦ is dangerous since missing the right suit is expensive. If partner should raise to 2♠, then we could be in trouble. But this auction has warned both of us that there are dangers, and partner should not do anything rash.”

Falk and Robinson escape the redouble by bidding 1NT. Robinson says, “I hope I get doubled in 1NT so I can redouble to find partner’s best minor. I don’t bid three-card majors if there is a reasonable alternative.”

Falk says that while he is worried the opponents might have game, “maybe 1NT will worry them just a bit. Of course if partner has a good hand, he will do something to show it, and we will land on our feet. If partner plays me for an 8-count here and does something, I’m going to ask him to change his medications.”

Meyers called it close between 2♣ and 2♦, but both she and Colchamiro pull the 2♦ card of the box.

The passers, who insist that they are not suggesting sitting for the redouble, were demoted in the scoring.

Cohen recognizes that if partnership agreement dictates that passing is for business, “I’d better do something else. I’d like to play that pass here means you got us in, you get us out.”

Giragosian, the Joyces, Kennedy and Meckstroth also believe their pass allows the partnership to find its fit at the lowest level.