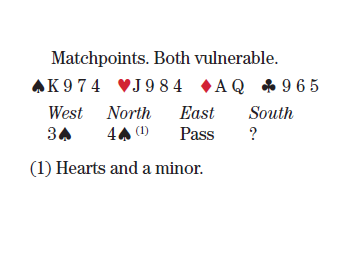 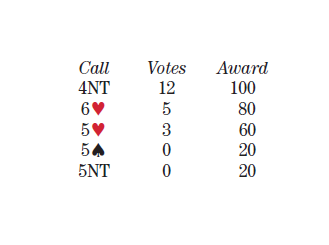 There is a decided tilt toward bidding 4NT before proceeding further. Some use it as the start of an invitational sequence while others are truly interested in learning which minor partner holds.

Falk is very clear about the 4NT call: “This is not Blackwood and it is not natural.”

Boehm says, “Partner should hold a huge distributional hand, perhaps 6–6, to preclude both 4♥ and defending. If his second suit is clubs, I’ll settle for 5♥, which should be a slam try. If he shows diamonds, I’m in slam.”

Cohen, Colchamiro, Kennedy and the Sutherlins, are using 4NT followed by 5♥ as an invitational sequence,
regardless of partner’s minor, and passing the decision to bid slam back to partner.

“I have a little too much for 5♥, but not enough to insist on slam,” says Cohen. “So the perfect solution is to bid 4NT, which surely requests partner’s minor. Once he shows his minor, my 5♥ must be invitational.”

“If I bid 5♥ directly, partner cannot know that I have extra values,” says Kennedy.

“4♠ is an expensive bid,” notes Lawrence. “It is dangerous and there are probably better methods. Still, Michaels it is. I bid 6♥, a clear guess.”

Giragosian feels less shaky. “4♠ showed a very big hand with hearts and another. Surely I have enough in this auction to bid a heart slam.”

The Coopers are worried they’re missing seven. “We see no intelligent way to try for a grand. Because partner is forcing us to the five level, he must have a truly monstrous two-suiter.”

Considerably more cautious, Meckstroth and Robinson bid 5♥. “I am tempted to bid 6♥,” says Meckstroth, “but I do have only one key card. It would be nice to bid 5♦ as an invitational 5♥ bid, a tool that many experts play.”

Robinson’s 5♥ allows partner a little leeway. “Partner’s guessing, so I’ll go low. One should never hang partner, because sometimes he has to overbid to show his distribution.”