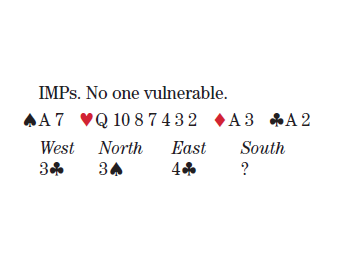 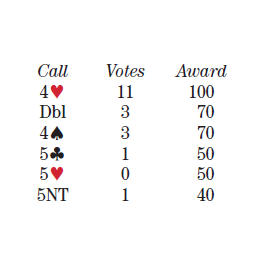 As always, the panelists are beyond bedeviled by opponents’ bothersome preemptive bidding. The majority took the conservative route.

Cohen calls 4♥ “such a big underbid that I am embarrassed that I will
have to see it in print.”

For Walker, the decision comes down to her spade holding. “We may be missing a slam, but without better support for spades, I don’t see an accurate way to find it unless partner moves over 4♥.”

“I can stand for partner to retreat to 4♠,” says Rigal, who also bids 4♥. “And of course on a good day, he might have a good enough hand to bid on, though I’m not expecting it.”

“4♥,” says Falk. “5♥ might be misunderstood as asking for club control rather than heart support. If the answer is ‘pass,’ 5♥ is too high. 5♣ loses my potential seven-card trump suit and guarantees spade support unless I have a good enough suit to bid on my own, which I do not.”

The Gordons call it “close between 4♥ and a card-showing double, but we feel that we need to show our seven-bagger, especially since we have (somewhat of) a spade fit to fall back on.”

Three panelists do choose to double.

Weinstein says that his double would typically show something like a 2=5=5=1 pattern, “but here I am not sweating a diamond response. My goal is to get to a 7–3 heart fit without inordinately emphasizing hearts over spades. I would be shocked if the double gets left in. Over 4♥ by partner, I will bid Blackwood, and over 4♠, I will try 5♣. If partner bids 4♦, I will underbid slightly with 4♠.”

Sanborn and the Coopers bypass the seven-bagger to raise spades to four. “So much to say, so little space,” laments Sanborn. “Partner surely rates to have six spades. If he doesn’t have a heart fit — likely — my hand may not be as good as it looks.”

While the Coopers aren’t sure that 4♠ is the best spot, “we don’t have anything else we can do that’s sensible. We hope the three aces make up for the missing trump.”

Lawrence goes all in. “5NT, asking partner to bid a slam of his choice. If he chooses diamonds, I will bid 5♥ suggesting hearts and some spade support.”