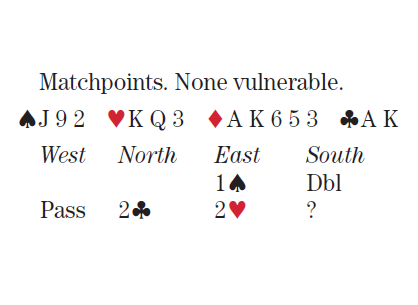 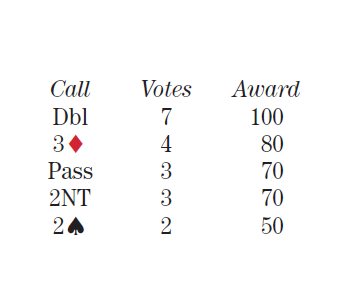 Wow! A 2NT opener relegated to … to what? Having dragged a 2♣ call out of partner the first go-round, seven panelists suggest a second double when opener rebids 2♥.

Colchamiro doubles with clear conscience. “It shows extras without four cards in clubs, which is what I have. Though 2NT is certainly possible here, I don’t like that I lack the heart ace. So I’ll try to beat 2♥ should partner pass, and I’ll make the obvious trump lead.”

Next up, the 3♦ bidders: “The diamond suit is deplorable,” say the Joyces, “but at least we are showing a good hand.”

“Pass might prove to be the winning option here,” Falk says. “These days East could have a 5=4=2=2 11-count or a good hand. I have 20. But it’s not a good 20 when diamonds rate to be on my left and I have no spot cards. I’d like to double again, but why shouldn’t that be a penalty double? I showed interest in hearts previously, and there’s only one suit left, so treating that as takeout is not at all clear.”

Three panelists pass.“I have never been endplayed with this fine a hand,” says Lawrence. “Guess there is a first time for everything. 3♦ might survive, but it might also be down a few if West is 5–5 in the minors.”

Meyers and Walker see their pass evolving into a plus score. “I forced partner to bid,” says Meyers. “I have what looks like six tricks in my own hand. I don’t see where we could have game so I am going to pass and take my plus score.”

“2NT is about right on values, but do I really want to declare when partner rates to be near broke?” ponders Walker. “I see a plus score coming if I defend.”

Three brave panelists try 2NT. “This is the closest description of the hand,” says Stack. “The only flaw is the shaky spade stopper.”

The Sutherlins call 2NT “an ugly value bid.” They believe that double would be penalty. “We may not have many minor-suit tricks on defense.”

“What a frightful problem,” says Sanborn. “I hate to let the opponents score up 2♥ or 2♠ for minus 110, so maybe our best result is minus 100 in 2NT. A second double should be penalties, and 3♦ is indelicate and inviting disaster, for sure. 2♠ is possible, but risks a 3♣ rebid on a four-card suit.”

And indeed, there are two 2♠ bidders. “This says nothing about spades,” says Cohen. “I might have the ace, a stopper or J–9–2. Regardless, partner will almost certainly bid notrump next if he has spades stopped. That’s all I want for now.”