Winners from the Michael Seamon USBC

Congratulations to the winners in all four divisions of the Michael Seamon Junior USBC:

The Michael Seamon Junior USBC — the contest to determine the teams that will represent the U.S. at the Junior World Team Championships in Suzhou, China next summer — is underway. Matches will be shown on BBO Vugraph starting on Thursday, Dec. 28.

For team rosters, schedule and news, view the Daily Bulletin at http://usbf.org/2017-michael-seamon-junior-usbcs/daily-bulletin. 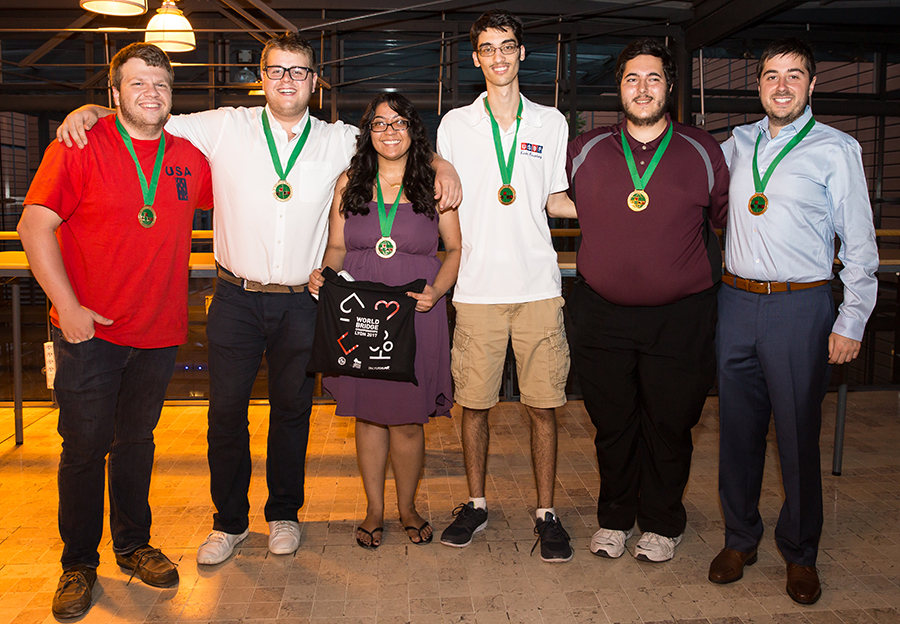 CTV in Toronto has a great feature about bridge and local youth playing the game. The Annual School Bridge Tournament was held yesterday with 127 tables. Almost 500 kids participated!

“All high schools have tournaments like in Debate, Mock Trial, and Model UN,” said Vallabh, captain of the NNHS Bridge team, “but there’s nothing for Bridge.” He added, “That’s why I wanted to start one.”
But unlike other interscholastic competitions where students compete face-to-face, this one was played online. Vallabh partnered with Bridge Base, the largest online Bridge site where thousands of people, including juniors, across the world can be playing at any given time. “We’re each playing from home,” said Vallabh. A total of 20 students played in the high school tournament today.

Jeff Lehman, who coaches the Newton North team and is also president of New England Youth Bridge, says Bridge is particularly suited for the high school mind. “Each Bridge hand is like a new puzzle,” he said, “it requires one pair of players to work together toward a common goal using logic and strategy.” Once they learn, Lehman added, they’re hooked for a lifetime.

Yet, Bridge has had trouble gaining traction in schools. Bill Gates and Warren Buffet, both avid players, even pledged $1million in 2005 to promote Bridge in schools.

Vallabh says he hopes this tournament will encourage other high schools to start their own Bridge teams. “People think Bridge is for old people,” says Vallabh, who began playing in 1st grade. “It’s not.”

Bob Hamman and the US Junior Program

The United States Bridge Federation junior program, directed by Michael Rosenberg, provides players under the age of 26 with USBF mentors to improve the quality of our junior teams in international competition. As part of the program, practice sessions are held on Bridge Base Online (BBO), where the juniors play team matches and the mentors analyze and comment on their play. The matches are 15 boards, IMP scored, and take about 90 minutes.

The program has recently instituted “Monday Celebrity Guest Night”, where, on the first Monday of each month, a world-class player sits in, partners a junior and plays in a team match.

On Monday, March 6th, beginning at 7pm Eastern, the celebrity guest will be Bob Hamman. Larry Cohen and George Jacobs will provide commentary. Kibitzers are invited to watch by logging on to BBO, going to the “Vugraph room” and joining the tables designated “USBFJR.”

In January Geoff Hampson participated and in February, Brad Moss. In future months it is expected that the juniors will be joined by Bobby Levin, Mike Passell and John Kranyak, among others. The USBF is most appreciative of the voluntary contributions these top players are making.

Here are the final results of the second qualifying stage:

The top two teams from each bracket have qualified for the finals in Toronto. The following is the complete list of qualifiers from both competitions:

Mary Lynch, a middle school teacher at North Star Charter School, taught the school bridge program to a class of 30 students. They ended the quarter long class with a duplicate tournament hosted by the Duluth Duplicate Bridge Club in Duluth Minnesota.

Each student received an ACBL neon yellow backpack at the end of the quarter and trophies were awarded the top three pairs.

To read the article from the Duluth Budgeteer, click here.

Orange schoolkids prove bridge is for the young, too

Burke Snowden is 2016 King of Bridge

Evan Berman, a senior at Cardinal Mooney Catholic High School, talks about what fuels his interest in the card game of bridge. For the full article click here.

A New Generation Discovers the Old-fashioned Game of Bridge

For the full article from Sports Illustrated, click here.

Youth and Junior entries
Coupons will be made available for Junior members in good standing for entry into events at NABCs:

Bridge The Next Generation

Interesting article on BridgeWinners. Check it out here.