Be cool! Bridge is fun.

The ACBL Board of Directors and Management are committed to improving acceptable player behavior at all times. In accordance with Laws 74, 80B2(f), 81C4, 90A, 91, and 92A (Laws of Duplicate Bridge) the following policy outlines what is expected of all players during NABCs and other ACBL sponsored events, as well as in the playing area before and after each session.

The ultimate purpose of the Z-T policy is to create a much more pleasant atmosphere in our NABCs. We are attempting to eradicate unacceptable behavior in order to make the game of bridge more enjoyable for all. Below are some examples of commendable behavior, which, while not required, will significantly contribute to the improved atmosphere:

The following are some examples of behavior which will not be tolerated:

If a player at the table behaves in an unacceptable manner, the director should be called immediately. Annoying behavior, embarrassing remarks, or any other conduct which might interfere with the enjoyment of the game is specifically prohibited by Law 74A. Law 91A gives the director the authority to assess disciplinary penalties.

The following procedures have been given to the tournament directors for implementation. 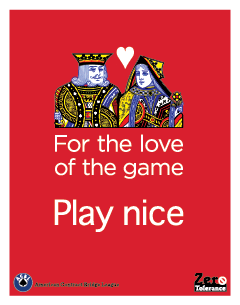 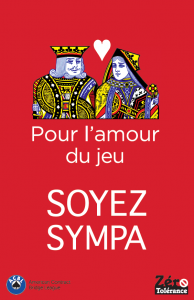